In case you have not read some of the other articles I’ve published on this web site, I should begin by saying that my son had terrible colic, was diagnosed with severe GERD (Gastroesophageal reflux disease) at 2 month of age, and was diagnosed with a bad milk allergy by his 8th month. At the writing of this article my son is 3.9 years old.

Six months ago my wife started looking into Milk Kefir as a treatment for some health issues she was experiencing; she also thought that my son and I would benefit from its consumption. Instead of trying to list the various health benefits in this article, I’d like to point out that it has a very high concentration of probiotics and has been alleged to aid digestion, lower cholesterol/blood-pressure, and incite world peace. I let you guess which of those is an exaggeration of the truth. The following links might educate you better: Wikipedia’s Kefir Page and Comprehensive Kefir Information from a believer 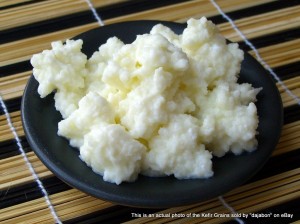 The Proof is in the Pudding

On his current diet of Milk Kefir Lex can now eat any quantity of and variety of cheese without any digestive issues. Three years ago, the smallest trace of any dairy product gave him endless diarrhea. We no longer give him daily does of Culterelle Probiotics. We expect that 20+ friendly bacteria strains in Milk Kefir are more than enough for our son. Honestly, Lex is the most regular that he has ever been.

Perhaps coincidentally we were able to reduce his GERD PPI medicine by half for the first time after after Lex was taking Kefir for two months. This was totally unexpected after so many previous failed attempts. I can’t help bu think there is a connection between this wonder food and the improvement in his reflux.

We recently went on a cruise and for some very foolish reason we did not take any Milk Kefir or Kefir Cream Cheese; we took some Soy Milk instead. Bad idea. Firstly he would barely drink it. Secondly, although we resumed giving him 1 capsule of Culterelle probiotics each day, Lex developed a bad case of diarrhea. We are almost certain it came from all of the cheese and deserts that we let him eat while on the cruise. When we cut off the cheese and dairy-containing desserts Lex returned to normal. I am almost certain that if we had been giving him Kefir Cream Cheese as regularly as we do at home that he would not have had any digestive problems. Needless to say, when we got home we were all happy for him to get back on his super probiotic-fortified milk Kefir.

I was skeptical of Milk Kefir and all of the miraculous claims that my wife told me about, but after what I have witnessed I now cannot deny that it has helped my son greatly. He likes the flavor and I know that he loves the ability to eat regular cheese and even regular ice cream without getting diarrhea or bad gas. Even I feel better when regularly eating it and it has lowered my wife’s cholesterol as well! Has it cured my son’s Milk Allergy? No, but it is treating it, or rather it is controlling it and permitting him to eat, within reason, as all of his other friends do without any concerns. We don’t even tell others that he has a milk allergy anymore and we don’t worry about him being offered or finding dairy products.

We now give Lex just about 1/3 cup of straight milk kefir mixed with about 3/4 cup of 100% fruit juice. He seems to like it and it mixes more smoothly. He seems even more regular now than before and more importantly he seems to have no trouble with the occasional ice cream or chocolate milk. We still add KAL Crystal Calcium to the “shake” and also supplement every other day with those Calcium Gummy Bears.

16 thoughts on “Milk Kefir for Children: Excellent Probiotics and a Milk Allergy Cure?”