There are a handful of events that parents must not overlook when kids are involved, especially when the entire magic of those events depends entirely on the parent(s) playing his/her foreordained role. Tooth Fairy is very much one of those roles.

Our 4-year-old son, Tex (a nickname he likes), lost his second tooth last Wednesday while eating a Burger King Whopper (I know, not very health conscious, but quite budget conscious with $2.99 Whopper Combo Wednesdays). It had already become so loose that the jagged top part was cutting the inside of his mouth. He cautiously let me clean the blood with a napkin and while doing so I got a grip on the tooth, but it still seemed to have its own grip on his gums. So I left it alone, thinking we were still days away. Then about ten minutes later Tex suddenly shouted “My tooth” and scrambled about sorting through his shirt like a bug had crawled up on him (which is a true honor for Tex if it ever happens). In disbelief I assisted him and we found the fallen tooth.

That night he and my wife took his tooth and put it in the little case under his pillow. After Tex went to sleep my wife said I could wait until the morning and just make the tooth-cash swap when he woke. I thought that this was a bad idea, because he would quickly remember the tooth when he woke and regardless, I would be too tired to handle the exchange with any slyness. I told her, “I’ll be careful not to wake Tex, and make the switch after he is sleeping more deeply”. Somehow I forgot to do anything at all!

Tex woke as normal and our morning routines were the same as any other day for the first 2 hours. It was then that I got a bloody nose (it has been very dry lately). Tex saw me sitting at my desk with a piece of tissue shoved in my nostril and asked what that was. As the bleeding seemed to have stopped I showed him. He responded, “I don’t have blood in my nose; I have it in my mouth. It came from my tooth.” At that very moment time slowed down as the wheels in both of our heads started turning towards the tooth and Tooth Fairy. Luckily my wheels turned in that direction just a little faster than Tex’s. 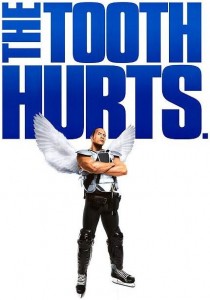 I rudely raced to get to the little safe where I knew I would find the only dollars bills in the house, while he continued to explain about the blood in his mouth, unknowingly in pursuit of a thought that I hoped would take a while to reach. Ridiculously, I lost precious moments trying to find the cleanest bills (darn my random perfectionism). Then Tex suddenly exclaimed from my home office “I’m going to go and check if the tooth fairy took my tooth and gave me money”. As he flew past the door to the room I was in (just one door down from his final destination) I nervously turned so my back was too him so that he could not see the bills I was fumbling through. I shouted out to him, “Wait… can you go and find… hmm… that tissue paper that was in my nose? I lost it.” He hesitated a brief moment, but replied, “OK”.

I exhaled a mental sigh a relief as he returned to the kitchen where he last saw me with the tissue and the blood. I knew he would be interesting is seeing the blood again and in helping me out. I dropped the perfectionist notion of getting the crispest dollar bills and just grabbed a bunch. I scurried to his room, grabbed the tooth case, put down what turned out to be 11 dollars (a bit too much, in my opinion, hopefully this wasn’t a precedent setting error), and set the pillow nicely on top of it all. I hid the tooth case in my clothing as I ran to find him and to tell him, “Hey Tex, forget about the tissue paper. I remember that I put it in the trash.” Tex’s thoughts returned instantly to his tooth and its fairy. We hurried back to his room to happily discover that in fact the Tooth Fairy had not forgotten to do his duty.

2 thoughts on “The Absent-Minded Tooth Fairy”