In a recent visit to Tokyo, one of my favorite destinations, I had an urge to explore Tokyo differently than I had before. Already different from my previous visits, I was accompanied this time by my 2-year-old boy, Lex. I had already conquered the subway and train system, knew how to decipher Tokyo’s cryptic address system, and I had lost myself on foot in many neighborhoods. So you would think doing it all again with a toddler would provide enough of a different perspective and challenge.

Well, you would think wrong. It took us both little time to find all of the hot-spots for toddlers (department store toy stores and miniature rooftop amusement parks, Kameido’s Sun Street, handicap bathrooms {because of their changing tables and toddler restraining seats}, Roppongi’s Tokyo Midtown, Tokyo Tower, and countless hidden playgrounds) and it was not long before the novelty of train riding wore-off for Lex. 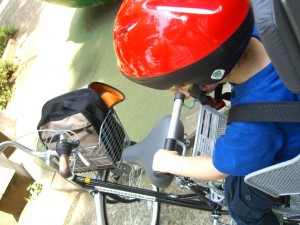 At first we watched with envy mothers and children zoom from place on their “Mamachari” bicycles while we trudged along sweating (well, the sweating was mostly me because I was carrying Lex everywhere, for speed and safety). An acquaintance made at Shibuya’s Tokyu Department Store (great for kids) suggested I should just buy a bike on Craigslist and resell it when I was done as this would probably save lots of money over renting a bike. I thought their idea had merit except for two points: I wasn’t planning on renting the bike for long and bikes with child seats are rare on Craigslist and Gaijin Pot.

Where to Rent a Bicycle in Tokyo

A third point also pointed me away from purchasing a temporary bike, I discovered Tokyo Rent a Bike. Not only did they rent bikes for as little as ¥600 per day, they gave discounts for renting for 2 days or more. We first contact Tokyo Rent a Bike because they seemed to be the most straightforward show in town and they had the best price. The website was in English and so I thought it would not hurt to shoot them and email and ask if they rented a bike with a child’s seat.

The extremely kind director of Tokyo Rent a Bike, Neil Garscadden, sent me a picture of the child seat with his very prompt reply and told me that it was definitely for rent. I asked him to hold the bike for me for the next day and he immediately confirmed that we would.

Lex and I made our first trip to Naka-Meguro station and headed directly to the Tokyo Rent a Bike office. We found it without any problems, unless you count our failure to read instructions and end up ascending the wrong building as a problem. Anyway, Neil met us below and pointed out the bike immediately before we went upstairs to the office. We spent only a brief couple minutes in his office filling out a simple form with our info and leaving our ¥900 (we got a bike with gears, the childseat rental was FREE!). Neil even threw in free helmets for us both.

Neil showed us how he had outfitted his nice “city bike” to be a “mamachari” bicycle for us, with the full coverage kick-stand that is essential with child seats. He even ran back to the office to get us some maps and gave us some quick and nice instructions to help us get back home to Jingu-mae. He recommended we stick to the sidewalks and use the bell as we came up on pedestrians. We followed his advice.

A Bump in the Road 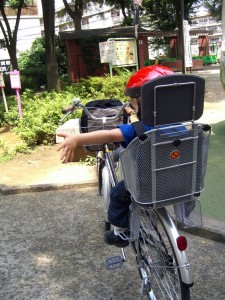 On the way home, we had a flat-tire. It must have been all of that construction near Shibuya. Anyway, we had reached our “hood” and so I knew a good backstreet to walk the bike down. Naka-Meguro hadn’t seemed so close on the train maps, but without a flat tire we would have reached Jingu-mae / Harajuku in less than 25 minutes. I called Neil and he told me how to get it fixed easily. He even offered to come out and fix it if I had any trouble getting it fixed locally. He swore he had never had anyone get a flat and I believe him, because as it turns out it wasn’t really a flat but a lost valve.

After Lex’s lunch and subsequent late nap we set out to find a shop that fixes flats and we hit gold right off. We hadn’t noticed at the time Neil’s message on our phone offering for us to keep the bike for free for an extra day or two because of our inconvenience. After the tire was fixed we headed straight out toward Roppongi and Hiroo. Our first stop was the huge, beautiful, and mosquito-infested Aoyama Cemetery. Lex loved riding through it and running around it just as much: chasing kitties and inspecting the bike a little too. 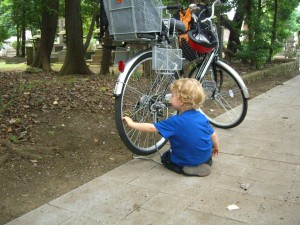 Along the way we found a fantastic playground and we never made it any further. Lex wouldn’t budge and a quick text message to Neil revealed his invitation to keep the bike for at least another day due to our troubles and delay. I was thrilled to keep it another day and in fact I started fantasizing about all of the cool destinations we could visit and unknown locations we could discover with our new wheels.

Our Only Regret Was That We Returned It Too Soon

When it came time to return the bicycle we were reluctant to let it go. Tokyo Rent a Bike had it perfectly tuned and it was probably only a few months old (or so it seemed). It got us safely to where we needed to go. It had good reflectors and a front head light powered by a dynamo. It rode great and looked just as good.

Sayonara and Thank You Tokyo Rent a Bike 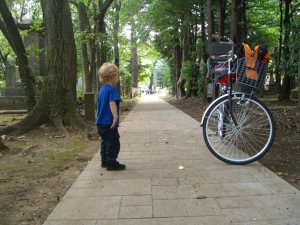 We forgot our map on our return trip to Tokyo Rent a Bike’s Naka-Meguro office, but we knew the general direction and milestones along the way. As we walked away from the office and toward the train station, we felt like just another couple sweaty foreigners in Tokyo. Having a bicycle to cruise the sidewalks/streets and mingle with the natives made us feel special, like insiders. Thank you Tokyo Rent a Bike for making us feel special and effortlessly making our trip to Tokyo much more special than it would have been otherwise.